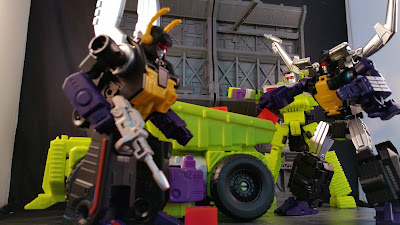 “As Gregor Samsa awoke one morning from uneasy dreams he found himself transformed in his bed into a gigantic insect.” ― Franz Kafka, The Metamorphosis 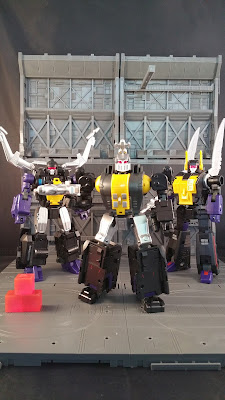 Still being a relative newcomer and underdog on the block, BadCube’s latest offering in their masterpiece-centric series of transforming robots focuses on a certain evil robot faction’s favorite insectoid backup troops. Toy Dojo is proud to present Hypno, Kickbutt, and Claymore – The Evil Bug Corps.

The Evil Bug Corps certainly have the look down. Each bug does a really fantastic job of skirting the line between cartoonish accuracy and toy homage while also realizing the characters as true 3 dimensional objects one can hold, manipulate, and transform. The use of a matte black with highlighted areas getting a different glossy finish comes off as really classy and helps break up the monotony of figures, who for the most part, are mostly one color. The components of each bug that were traditionally chromed on the original G1 figures they were inspired from are done in a smooth metallic silver here. I won’t solve the chrome vs. silver debate in the fandom here, but if chrome is your thing there will be a collector’s edition (link available at the bottom of the article) with chromed and translucent parts available. This reviewer found the silver very appealing. The proper deep evil robot faction purple is represented everywhere it should be along with some nice paint touches of brick red and a vaguely teal blue. There are some sharp lines and tech detailing that does a good job of breaking up what could be a very blocky silhouette in both modes while managing to not look busy. They look right at home grasping for the included pink energy cubes. Speaking of the energy cubes, they are made of an interesting rubber material that makes them adhere to each other (assumedly to make stacks like the cartoon) but are otherwise not tacky to the touch. A really interesting and welcome accessory. 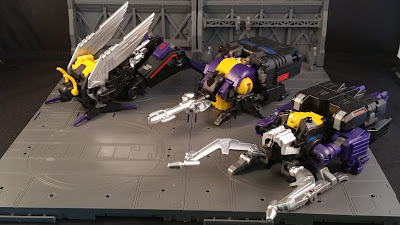 Build wise, the figures seem well thought out. In bug mode, each figure is a little limited in the articulation department but some of that is probably by design as the G1 inspired cues don’t leave a lot of room for any truly inspired movement. Kickbutt possess an interesting leg-kicking gimmick, while Claymore and Hypno sport posable ball-jointed bug appendages. In robot mode, ratchets are present in the hips and ball joints that are tight but malleable without a feeling of being loose. Each of the figures share at least some small level of common engineering with similar joints in the arms and hips. With the exception of Hypno, who has some additional shoulder movement, the figures share the same general range of articulation in robot mode. Each figure boasts the following: 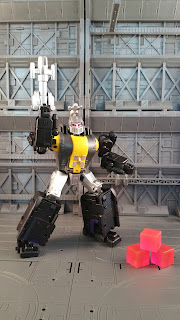 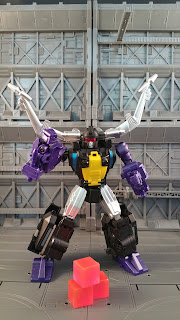 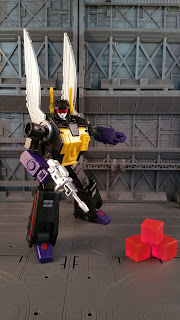 Each member of the Evil Bug Corps brings something interesting as part of their transformation. A secret sauce of buggy transformation magic if you will. Kickbutt manages to absorb the bugs ratcheted knee joint, which supplies his kicking gimmick, into his robot mode leg. Hypno has a color change gimmick where his purple bug mode chest folds into his legs revealing a cartoon accurate grey chest during his transformation. Finally, Claymore performs a fascinating bit of auto-transformation when you slide his abdomen up it automatically enlarges his chest to proper cartoon proportions. 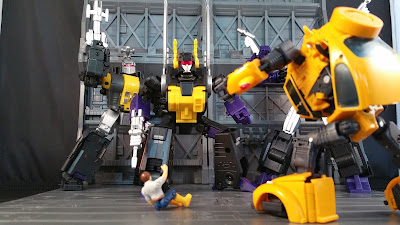 Unfortunately, owners might find themselves a little frustrated with the transformations over all. Of the three, Claymore comes off the least frustrating with a generally straightforward transformation save for a bit of difficulty pegging the arms into the legs and getting the face covers to close just right. Hypno’s transformation feels like it could have benefited from a bit more room for the bug face to fold up into the chest and a more sturdy connection to hold the chest and head in place as the supplied pegs and notches like to come undone frequently. Kickbutt is by far the most difficult of the three to transform. Getting his bug legs tucked inside his chest while at the same time having to manage the right position of the wings and the robot mode armatures can be difficult. In essence, BadCube makes no cardinal sins in their transformations that would result in fragility or stressed parts, but it lacks that certain “fun” factor this reviewer tends to appreciate in his figures. It’s a fine attempt if you care more about the destination than the journey - the final result in both modes is worth the frustration. 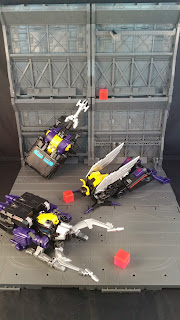 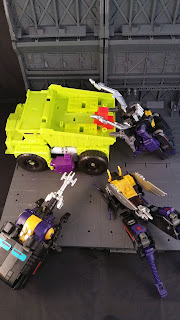 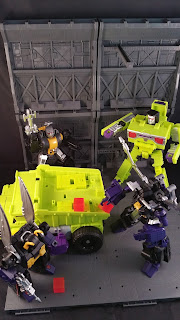 In the end, these figures certainly do their job. Anyone with a passing remembrance of the original cartoon will certainly recognize them straight away as the famous insectoid robots of the series. The figures hit all those poseability check boxes that one would expect and they look wonderful with your other masterpiece style figures. There is no shortage of competition in this area with at least two other known manufacturers presenting their own take on the evil insectoid troublemakers later down the road. Ultimately, it will come down to your unique sensibilities and what aesthetics, sets of colors, and overall features appeal to you as a consumer. If the BadCube Evil Bug Corps hit all the right notes for you, and you don’t mind a somewhat fiddly transformation, you should find yourself quite pleased if you decide to make the purchase. 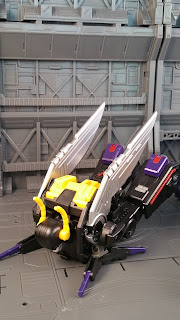 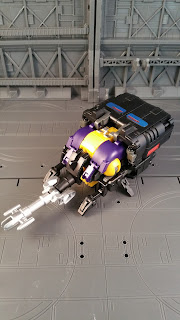 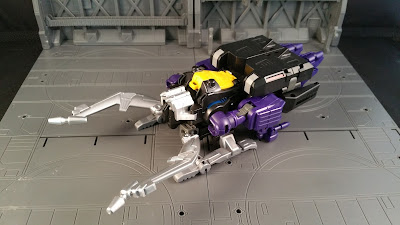 You can get all three of the Evil Bug Corps in a special value giftset here.

Or you can grab a more premium chrome and transparent toy based deco of Claymore here, Hypno here, and Kickbutt here respectively.

EDITORS NOTE: This feedback was driven by a pre-release copy of the aforementioned figures. Minor changes and improvements may be incorporated by the manufacturer before release.
Posted by portudork at 10:07 PM