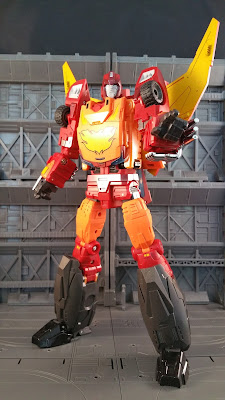 “Leaders are made, they are not born. They are made by hard effort, which is the price which all of us must pay to achieve any goal that is worthwhile.” ― Vince Lombardi 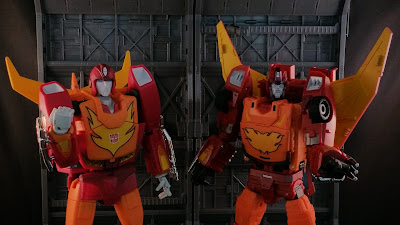 DX9 is not content to be a one trick pony that specializes in a single range of transforming robots. In addition to their amazing War in Pocket figures and their add-on kits, they have recently started giving us some great large-scale, mainline figures such as Chigurh and Invisible. The company seems to have taken all their recent successes and put them to good use in the design of their latest figure.  Their next project is the somewhat oddly named Carry, the vaguely masterpiece inspired version of the fire chested heroic leader of a certain TV series about giant transforming robots. 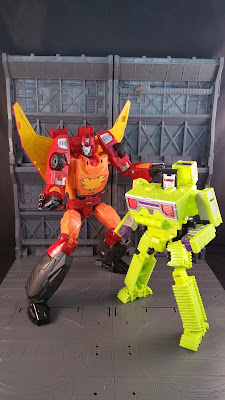 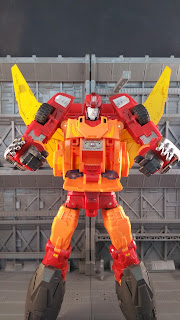 There’s no accounting for taste when it comes to names, Carry is certainly an odd duck in that regard. I can only assume it must be related to the idea that the homages character carries the matrix within him. To an extent, this feature is actually replicated in the figure with the inclusion of a molded non-removable matrix in his chest chamber. In robot-mode the figure stands tall. In fact, equally as tall as the official Takara and Hasbro masterpiece versions of the character. Initially, this figure appears to want to make itself at home among your masterpiece figures but not all is as it seems. We will get to that a little later. Carry’s design is clearly inspired by the art of Studio Ox as presented in TV Magazine and Comic Boom Boom manga in Japan during the early 80’s. The large spoiler, muscular legs, and unique facial design really nailed this stylistic influence. Carry sports the character’s instantly recognizable colors with a beautiful maroon and almost carrot orange. This is accompanied by some deep gray and highlights of canary yellow on the arms and most prominently on the spoiler. Translucent headlights are present along with some black diecast feet and lovely chrome pipes that really help elevate the figure. There is some obvious love and attention to detail here.

The figure has a nice solid feel in both modes. In robot mode, Carry has a heft to him that just feels like quality. Thoughtful use of various types of ratchets makes posing him a breeze; although, there is a conspicuous lack of ratcheting in the forward motion in his hips that would have put the figure over the top. Ultimately, Carry boasts an amazing level of articulation which includes: 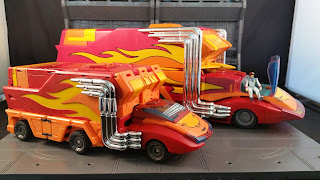 In vehicle mode, Carry shows off a futuristic camper design very reminiscent of, but not exactly like, what the source character had in the series. Missing is the usual spoiler and a few minor artistic liberties were taken with the detailing throughout. An opening transparent canopy and real rubber tires really sets off the alternate mode. Unfortunately, this is also where the figures only real shortcoming is found. The vehicle mode is definitely on the small side. While boasting some hardcore masterpiece cred in robot mode, the vehicle mode struggles to be in scale with anything but your CHUG figures. While the mass shifting of size between modes is an engineering marvel, it leaves the collector somewhat confused as to where this figure belongs in their collection. I think acceptance or rejection of this minor issue will be a point of contention from collector to collector. For me, the grandness of everything else this figure does well makes it an easy error to look past. 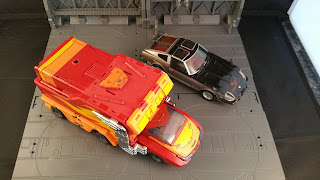 Until now, I have yet to point out what many will feel is this figures real claim to fame. Unlike every other figure of the source character available (save for the forgettable Titanium offering), Carry manages to integrate his trailer into his transformation. Transformation from robot to vehicle mode is both intuitive and fun. It feels somewhat like performing a magic trick as the legs morph into the wheel and support structure of the trailer while the backpack unfurls into the remaining rear end of the vehicle. Some clever hinging in the chest and rotation of the backpack assembly really highlight the designers understanding of fluidity and blends the line between complexity and fun. Also included is a target master which is itself a well-articulated mini figure with a simple but effective transformation from gun to robot mode. This inclusion seems strange since the source character was never a target master in the original series, but I certainly don’t mind its inclusion here despite my preference for maybe a plainer rifle. 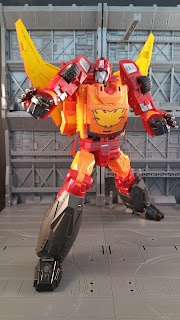 It seems the designer’s intention with this figure was to invoke the Studio Ox art style of the character while incorporating the trailer into both transformations. In this regard I feel DX9 has succeeded greatly despite the somewhat odd smaller proportions of the vehicle mode. Even as an owner of both the Takara and Hasbro versions of Masterpiece Rodimus Prime, I found myself unable to negate the value of this figure. It is my opinion that this figure gets the real “feeling” of the character that the official release never quite managed in trying to be both Hot Rod and Rodimus Prime. If you can get past the small vehicle mode, you won’t be remiss adding this well implemented figure to your collection.

You can pre-order your DX9 Carry on our site here.

EDITORS NOTE: This feedback was driven by a pre-release copy of the aforementioned figure. Minor changes and improvements may be incorporated by the manufacturer before release.
Posted by portudork at 11:25 PM