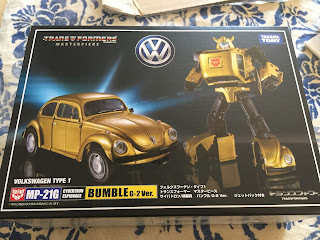 The first Masterpiece Bumblebee was one of the most delightful surprises to come out of the Takara design crew in the last few years. Rumors had swirled that a new toy of Bumblebee that turned into a bonafide Volkswagen Beetle--or even a reasonable facsimile--would never happen for licensing reasons. And of course, the character of Bumblebee had been reinvented as a "cooler" Chevrolet Camaro in 2007. But whatever deal had to be made was made, and the final result is an amazing compromise between the "chibi" proportions of the character and the real-world car.

The original MP Bumblebee was sold at pretty much the normal asking price for Masterpiece car Transformers, but with a bonus "exo-suit" figure to offset Bumblebee's comparative small size. His redeco, Masterpiece Generation 2 Bumblebee, has been sold with a different approach--dropping the exosuit and the price, yet also having a premium deco, bonus labels, and a couple of extra, smaller accessories. Given that, I am able to recommend this figure without reservation to any remotely interested collector.

As good as MP-21 is, his slavishly accurate cartoon coloring somewhat washes out and obliterates the detail of the mold. He's all bright yellows and whites. MP-21G is silver and gold, looking like a much more premium toy while revealing the crisp, beveled lines of the two interchangeable "cartoon" face sculpts. I think the designers made a wise choice to forgo the brilliant gold gloss of the original G2 version of the toy for a more subdued and classy look that integrates well into most displays. 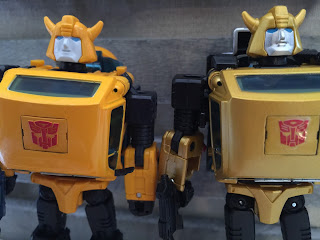 Of course, MP-21G also comes with a new, third, toy-based face sculpt. The original G2 Bumblebee toy (the second Transformer I ever owned) was a redeco of the G1 Bumblebee, which had a sharply pointed visor and faceplate. The cartoon replaced this with a friendlier, cuter version of Cliffjumper's head, which became the iconic look for the character. Ironically, to match the cartoon-accurate look of the Masterpiece Bumblebee mold, the new face is kind of adorably precious. Unfortunately, my toy face mask has a small blemish on it (looks like mold flash) so it's not my favorite right now. I know this is not typical of the figure, however. Isolated quality control issues happen and I don't like them to bleed into general reviews.

Also inspired by the cartoon is his jetpack accessory, which was used in the show to fly to "Dinobot Island" and the like. This is not compatible with any other figure, but because it is molded to this one's back, it is quite secure. Unfortunately it requires you to set aside the original "spare tire" accessory.

The new sticker sheet is worth a mention. There are two stickers which closely resemble the tampographs that were put on all of the original Generation 2 Autobot figures. However, they do not appear to have any corresponding area on the figure to affix to! The instructions leave these labels off. The other labels give a choice between G1 and G2 Autobrands (for another bit of irony, the original G2 toy had a G1-style Autobrand) and allow for two very obscure references--the "I <3 NY" sticker he sported in a single episode of the cartoon, and arm labels he had in the original comic adaptation of "The Transformers: The Movie." 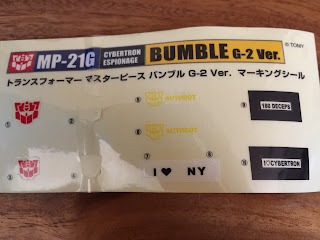 There are a number of potential display options with this figure--you can apply all of the labels, some, or none. You could differentiate him from MP-21 with the toy-accurate mask and G2 insignia; you could go "G2 comic accurate" with a cartoon face and G2 insignia; you could make him a Goldbug homage with toy face and G1 insignia; or do what I've done for now, with G1 insignia and a cartoon-style face, which essentially makes him a more striking version of the original MP-21. 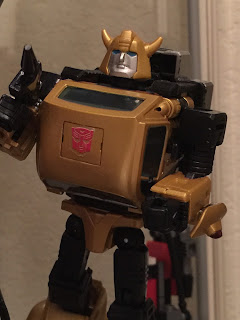 Because if you don't need an exosuit in your life, that's exactly what this is--a cheaper yet more striking version of the Masterpiece Bumblebee. He looks more like a "Masterpiece." I know some people like their MPs to look like they've stepped right off the TV screen, but if you don't, MP-21G is an aesthetically superior figure to MP-21 while retaining its excellent engineering. At the price, I have no hesitation recommending the figure to anyone who doesn't already have and intend to keep MP-21.

As a kid who grew up during Generation 2, I hope that this figure and MP-12G Sideswipe show a willingness from Takara to keep homaging this iconic time in the history of the brand. 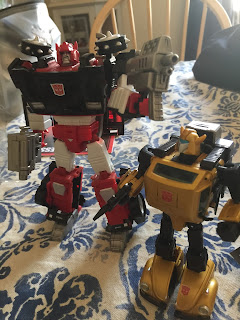