Quakewave - A look back and a look forward 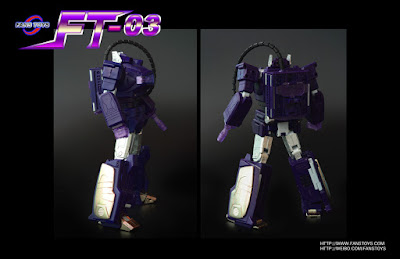 If there was a singular figure that truly turned the 3rd party Transformers scene on its head, it has to be the remarkable Quakewave figure. Up until the time of its release, 3rd party figures rarely if ever waded into the masterpiece levels of scale and refined complexity. All that changed when Fans Toys released Quakewave, a 3rd party interpretation of the evil cycloptic commander waiting on the other side of the space bridge. Even more amazing was the fact that this was Fans Toys first major release (a few smaller releases of add ons preceded Quakewave). This figure would continue to stand as a gold standard even today as other figures and manufacturers joined the 3rd party masterpiece revolution. 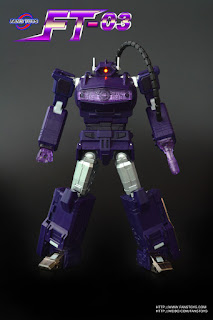 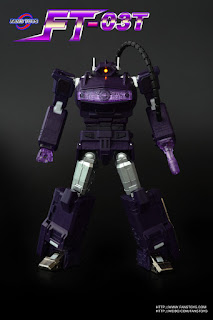 Quakewave comes from a masterpiece pedigree and it shows in the details of the sculpt that manage to show every detail of the characters depiction on the cartoon while embellishing just enough to not look plain. Full articulation, an amazingly perfect amount of die-cast content, electronic features in the eye and arm cannon, as well as effective use of color and paint made this figure truly the centerpiece of any shelf he was put on. Though marred but an inaccurate hose location this was later remedied by Fans Toys with a set of replacement parts and instructions. Prices have since skyrocketed for this coveted figure putting him out of the reach of all but the most well to do collector. With a much heralded re-issue (FT-03 Quakewave) and a couple of special editions (FT-03T Toy Colors Quakewave and FT-03C Clear Quakewave) pending release very soon it seemed like a good time to look back and remember the magic and change to the collector space that Quakewave ushered in. If you don't have Quakewave in your collection, or do and want to pick up one of the new special editions, make sure and head to our store and pre-order today. As history has shown, you don't want to miss out a second time on this amazing figure. 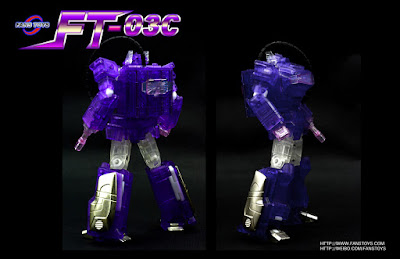