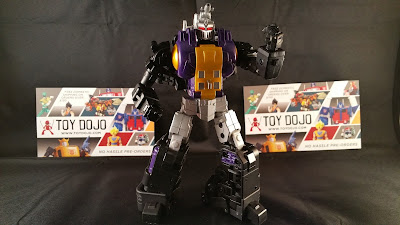 “I have my own views about Nature's methods, though I feel that it is rather like a beetle giving his opinions upon the Milky Way.” – Sir Arthur Conan Doyle

If I were to say to you, one of my favorite characters of all times is a Japanese Rhinoceros Beetle that controls others through the use of mental warfare, would you think I’m crazy? I can’t be the only person who adores this mental mastermind transforming Insecticon as the 3rd party transforming robot market's cup overfloweth with options for this particular character. In this article I will be talking a bit about Fans Toys FT-12 Grenadier - their latest entry in their masterpiece-centric line serving as an homage to the ever elusive Insecticon Bombshell. 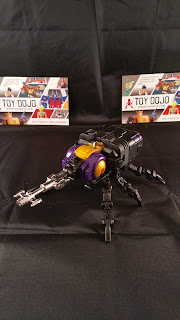 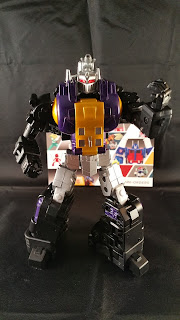 Grenadier is certainly a handsome fellow considering his alt-modes somewhat fearsome insect features. He stands a head or so taller than Masterpiece Bumblebee but he “feels” bigger in large part due to his muscular proportions, large feet, and dark color scheme. It’s also worth mentioning at this point that Grenadier comes in two flavors so to speak; FT-12T with a more toy accurate purple chest as well as FT-12 with a cartoon accurate grey chest. The one I handled in preparation for this article was the toy colored FT-12T version. The purple on FT-12 has some lovely metallic flake in it and really helps contract the dark grey and black colors throughout. This might be one of those times where I think I would prefer the toy colors over the duller cartoon accurate grey. His face with its grated design and miniature articulating cerebro launcher look particularly sharp but the insect mode legs hanging off the figures back and calves may be a turn off for some. The dark colors are also complimented with touches of yellow and red as well as an optional translucent yellow chest cover (either cover sporting a nice molded spot for your faction logo). Either way you lean, you can appreciate the refined soft edges and overall anime-like proportions that make this figure really stand out on a shelf. 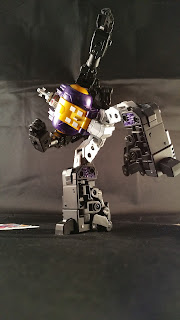 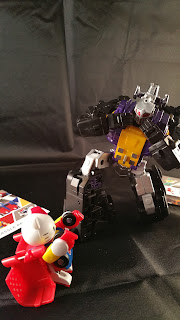 In robot mode Grenadier has impressive articulation with tight effective joints throughout. Non-supported high kicks are easy to setup as are more subdued action poses. A transformation joint on the forearm joined with the wrist swivel allows some great arm movement and enabling for face covering and double jointed rifle handling action – always appreciated! The neck movement is a little limited by the sculpt but the movement in the antenna/cerebro launcher allows for some additional emotion. Waist swivel coupled with nice side to side and forward hips allows for great upper leg movement. Even the knees are double jointed enabling some great running action shots. Anchoring the figure down is some heavy diecast in the legs finished with a slightly limited toe but impressive ankle tilt. Overall the result is the best jointed figure released by Fans Toys in their non-dinobot series to date. 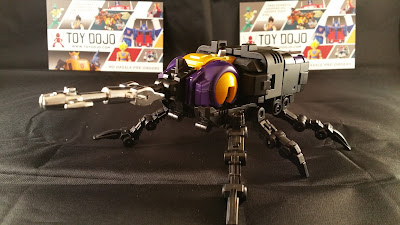 Transformation to insect mode complexity is what I have come to expect from a Fans Toys figure. Transformation is simple and intuitive enough to want to do it repeatedly but no so easy as not to present a challenge. Everything was tight, but not distressingly so and the movements of the legs folding in and the chest/head rotation all felt smooth and well thought out. The final result is the scariest beetle to ever haunt your nightmares. Most of us in the west have never seen a stag beetle but from what I see here I don’t know that I would want to. No one is going to confuse this figure with a real insect owing to the fact that in the fiction, much like the Dinobots, the Insecticons were always designed to be somewhat mechanical looking in appearance. Fans Toys replicated that techno-organic look perfectly while still managing to allow for modern articulation. With a telescoping and hinged center horn you can get quite a bit of expression. You have a choice in insect legs with Grenadier which is a very welcome option. You can opt for additional jointing and more flared legs or more simplistic toy inspired legs depending on your sensibilities. Both silhouettes are impressive in their own way and, regardless your choice, weapon storage is provided. For those taking note, those insect legs seen in the pictures here are the more jointed legs. 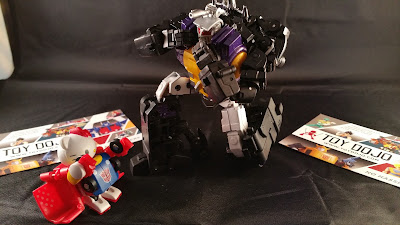 If you are in the comparing market, when compared to the recent Bad Cube offering I found Fans Toys quite a bit more “Fun” to manipulate (Bad Cube’s offering can be somewhat frustrating to transform) but the clean up on Fans Toys isn’t as strong. As previously mentioned there is some level of “bug bits just hanging on the back” going on with Grenadier though I found several methods of folding that minimized the effect. It’s also worth noting that the Bad Cube version offered up a chest color changing gimmick that is missing here but offset by the inclusion of an alternate translucent chest flap. It’s a tough call to make considering that there is also a 3rd offering yet to be shown in full by Mastermind Creations. It is worth mentioning that in the original cartoon, the Insecticons were often portrayed as having many duplicates so it wouldn’t be unreasonable to have multiple sets of Insecticons on your shelf – not that I am encouraging such gluttonous lunacy here at Toy Dojo.

In the end, I think it comes down to the feature sets and aesthetics that appeal to you. For me personally, the “fun factor” goes a long way and that is something this figure just extrudes in bunches. That coupled with excellent build quality and an aesthetic that appeals to me I find this figure irresistible. You as a discerning consumer must make the decision that is right for you. 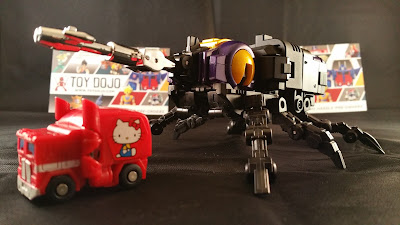 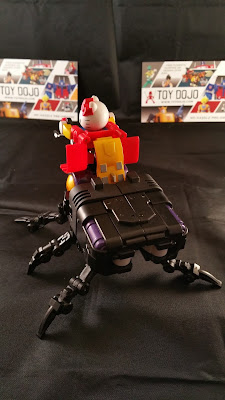 EDITORS NOTE: This feedback was driven by a pre-release copy of the aforementioned figure. Minor changes and improvements may be incorporated by the manufacturer before release. Q Transformers - QTF QTC-01 Hello Kitty is not included with purchase but is separately available here.
Posted by portudork at 3:41 PM