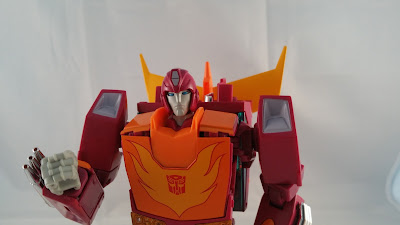 "All to often, on the long road up, young leaders become servants of what is rather than shapers of what might be." - John Gardner

Wait, didn’t we do this one already? Takara is back to take another masterpiece stab at the young matrix templar who famously couldn’t “get out of the way” during the epic final battle between Optimus Prime and Megatron. Hold on to your fishing poles and your twin photon rifles because this is a review and perspective article on Takara’s MP-28 Hot Rodimus. 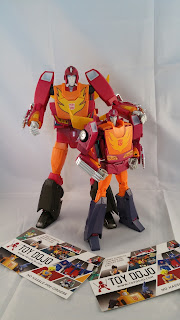 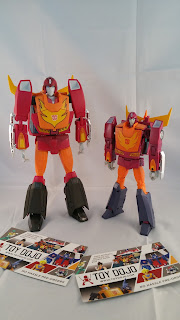 It’s hard to immediately start talking about MP-28 without at least mentioning the fact that this is technically the second figure this character has received in Takara’s masterpiece line. MP-09 released way back in 2011 was probably the most ambitious masterpiece ever released (and possibly since). With a design intended to capture both the pre-leader Hot Rod and the post-matrix gifted Rodimus Prime characters, it could be argued that Takara bit off more than they could chew. 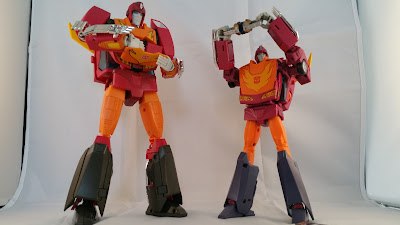 For Takara, the challenge of creating a toy that had 2 vehicle modes, 2 robot modes, and was based on a character design that frankly cheated right and left in the animation was daunting. This was apparent in the MP-09 release where numerous compromises were made. Scale was probably the largest issue as the vehicle mode and stature of the robot mode for Hot Rod in the animation were intended to be several factors smaller than Rodimus Primes. For MP-09, the result was a Hot Rod car that, while very accurate to the animation, was hilariously gigantic when put in scale with the later cars released in the line. MP-09’s Rodimus Prime “Space Winnebago” by comparison looks right at home next to MP-10. 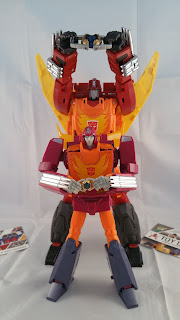 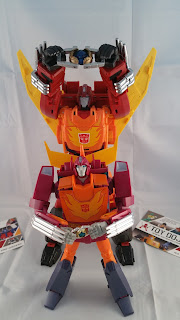 In MP-09’s robot mode there was little difference between Hot Rod and Rodimus Prime aside from a different face sculpt, slight variations in backpack wing height, and a minor increase in height created by modifying the alignment of the hips. All of this was famously marred by reports of severely thin connecting tabs, broken leg and elbows joints, scratched paint applications, and a transformation that was frustrating to say the least. A perfect figure it surely was not but, un-manipulated on a shelf, it was a beautiful piece in anyone’s collection. Now 5 years later can Takara write the wrongs of MP-09 and finally bring us a masterpiece Hot Rod that truly has the touch? Perhaps, with a few steps forward and in some cases a few tip toes back along the way. 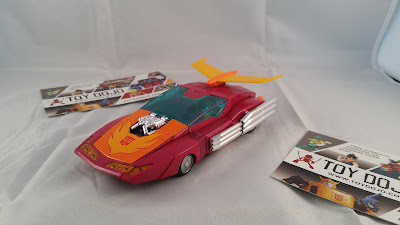 Starting in vehicle mode, it becomes apparent right away that MP-28 took a little more curve appeal from the original 1986 toy then from the animation model. Placed side by side it’s actually a little difficult to tell MP-28 apart from his older G1 figure. There weren’t jarring differences between the animation and the toy to begin with but the subtle curves from the hood along the door panels is definitely more squared off like the toys appearance. The excellent paint work and translucent plastic (the windshield and visor are indeed a proper deep blue and not “whitish clear” as some early samples were shown) work well together as do the artful flame design on the hood and the chrome accents along the engine block and exhaust pipes. Although not riding much higher off the ground then MP-09, this Hot Rod does not invoke the same burden to get everything aligned “just so” to allow the vehicle to roll on the ground as its predecessor did. Dedicated notches for the legs and collar keep the wheels well below the robot kibble. With a minor adjustment to the engine block, either of MP-28’s photon rifles can be hood-mounted just like the original toy. Additional dedicated ports on the roof can be used as an alternative storage spot. No storage is provided for the figures other accessories in this mode.

Transformation to robot mode is thankfully NOT the ordeal that MP-09 was, though there can be some steps missed going back to vehicle mode if you aren’t paying attention. Some clever bits of engineering are present in the way the arms flip around to cover the wheels on the shoulders. Also of note is the surprisingly solid way the entire top of the vehicle mode compresses and locks into the backpack. The legs borrow a bit of the “open leg panel and accordion out the legs” trick that most of the recent Combiner Wars figures have sported though it’s much more artfully managed here. The backpack on MP-09 was notorious for coming undone and fans will be glad to know it stays in place much more securely here. The transformation ultimately ends up being fun and intuitive enough that I had no issues performing it without instructions the first time while still providing a healthy level of difficulty. MP-28 is definitely a figure you will feel like transforming a few times if for no other reason than the sheer joy that it doesn’t take an hour to do like MP-09 did. 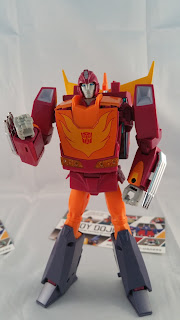 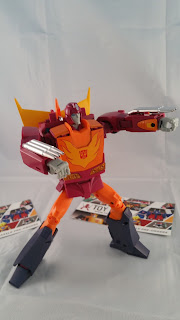 My impressions of the figure are initially very good, though there are some minor aesthetic concerns to be found if you spend long enough staring at every little detail. One of the highest praises I can give the figure is just how high the playability is for it (largely due to the type and range of joints used). Unlike the “shelf queen” status many had assigned to MP-09, MP-28 is actually fun to pose and move about your space! His range of motion is impressive and he is capable of striking most any pose from the animation you can think of. MP-28 Hot Rod’s articulation points include; 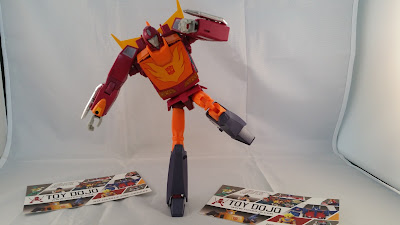 Although not quite animation accurate in how it opens, there is an opening panel in the chest that is dedicated to storing MP-10’s Matrix of Leadership (which sadly is not included). Other accessories include the famous fishing pole from his scene with Daniel in the beginning of the 1986 movie, the saw blade weapon he used to rescue Kup from the giant roboctipus in the same film, as well as both of his proton rifles. Personally I found the saw blade to be at least 30% too large for the figure but the other accessories are well thought out and help add value – ironic for a character who frankly almost never used any accessories in the animation. None of my figures joints felt loose and all accessories fit in their appropriate slots firmly. 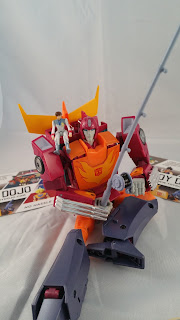 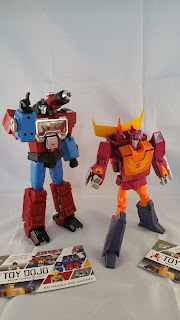 My gripes with the figure largely come down to things that I consider aesthetic and proportional nit-picks. The screw holes that keep the forearms together are displayed front and center on the figures arms which I think was just poorly thought out. The figures shoulder width can sometimes appear to be a bit too wide in some angles but it was an infrequent concern. In images the flatness of the chest comes off looking a bit out of place as does the slightly less pronounced popped collar, but in hand these issues didn’t bother me much. I think for pure adherence to the animation model, MP-28 is great but won’t quite beat out MP-09 in this area. The curves of the chest and the popped collar are definitely more in line with the appearance of Hot Rod in MP-09 then they are in MP-28, but that’s not to say that MP-28 isn’t close enough. The only other concern worth mentioning is that due to the sometimes wide appearance of the shoulders, this can accentuate the relative lack of girth in the legs and make his overall lower body appear perhaps too thin. Perspective and personal aesthetics play a big part as to if this might bother you or not. Much like Ironhide before him, Hot Rod isn’t necessarily the most photogenic figure. How the figure looks and feels in hand is far superior to any images out there so don’t form an opinion on photography alone or you might be missing out on something you really might love in person. As a reminder to folks in the greater Austin Texas area, Toy Dojo now maintains a brick and mortar shop and you are certainly welcome to come down and check out Hot Rod in our display and see for yourself. 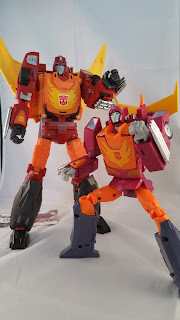 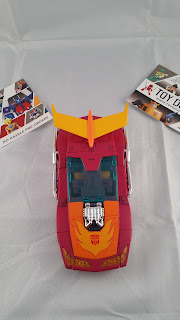 My final few thoughts on this figure are definitely overwhelmingly positive and a recommendation for purchase even if you already own MP-09. The playability, poseability, scale, and overall improvements in many areas makes this figure worth it to me. While not perfect, its improvements over MP-09 in the areas of fragility, transformation, and overall fun factor make this figure land near the top of my list for Takara’s recent efforts. While Ironhide still remains my favorite of the year so far, Hot Rod is certainly not far behind as my second. When it comes to this figure, experience truly is the benchmark of maturity and actions really do speak louder than words. 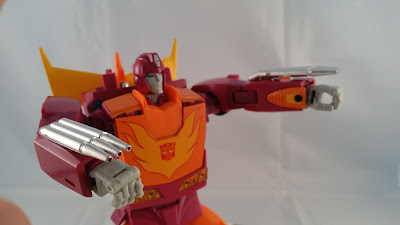 Make sure and pick up your MP-28 Hot Rodimus figure from the Dojo here.
Posted by portudork at 3:03 PM 1 comment: