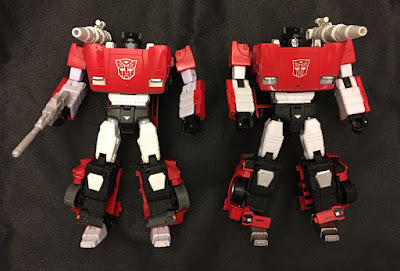 Side by side comparison in robot mode. 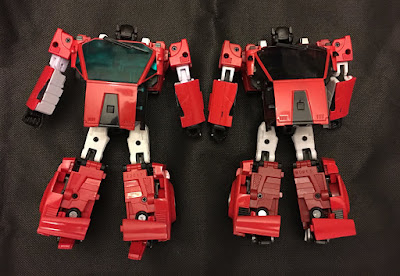 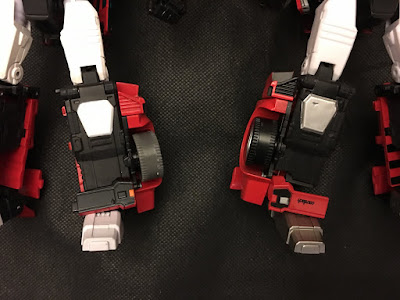 The Autobot logo on the chest is much larger and more cartoon like in the newer version.  The face is also different.  It looks like MP-12+ uses the red alert head mold and a slightly lighter grey paint.  The headlights no longer have a black outline as well.

One of the biggest gripes with the original MP-12 was the difference in shades between the painted clear parts vs the painted solid parts.  Takara Tomy did a much better job matching the paint on the latest figure.  The windows are a clear blue tint and the red on it seems to match the doors much better than MP-12 did.  You'll still notice some overspray as with the original release but overall it looks a lot cleaner. 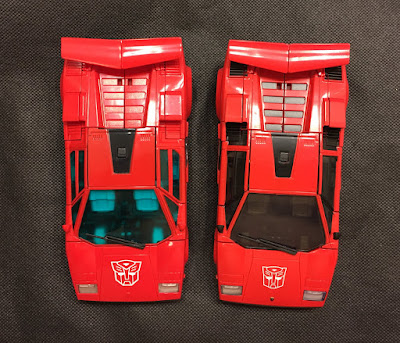 It's hard to tell in the pictures but the red on the original MP-12 had a hint of orange while on MP-12+ Takara Tomy took the orange out.

The tires on the latest figure are a grey color instead of black.  The rear bumper is painted entirely black with orange lights.  It looks like this was done to make the legs as cartoon accurate as possible.  The Lamborghini logos on the hood and back are no longer there on the new version.  Instead they are painted over on the hood and covered up by the black on the rear.  The front bumper on MP-12+ is accented by a metallic grey which is hardly noticeable while MP-12 was done in shiny silver.

Overall MP-12+ does make a good number of changes over the original to make it worth picking up.  The addition of paint and the  paint matching is better and if you're looking for a more cartoon accurate figure, this is hands down closer to the screen than the original.  The logo on the hood and the bumper are a few things that the original MP-12 did a better job with.  The all black bumper on the new version takes away detail that made the vehicle mode a lot more clean.  If you're convinced MP-12+ is the Sideswipe for you, you can pick yours up at Toy Dojo here: https://www.toydojo.com/masterpiece-mp-12-anime-colored-autobot-lambor-sideswipe/
Posted by edbomber at 1:54 AM