MP-41 Dinobot is the 3rd in Takara’s entry in the Masterpiece line to include a non-G1 originating figure. Like Beast Convoy and Cheetus (Optimus Primal and Cheetor in the states) before him, this figure presents new and interesting challenges in the masterpiece lines goal of creating show accurate robot and alt forms. Success or failure when dealing with organic forms can make or break this kind of figure. How does Dinobot stack up? Spoilers – overall he hits all the marks. 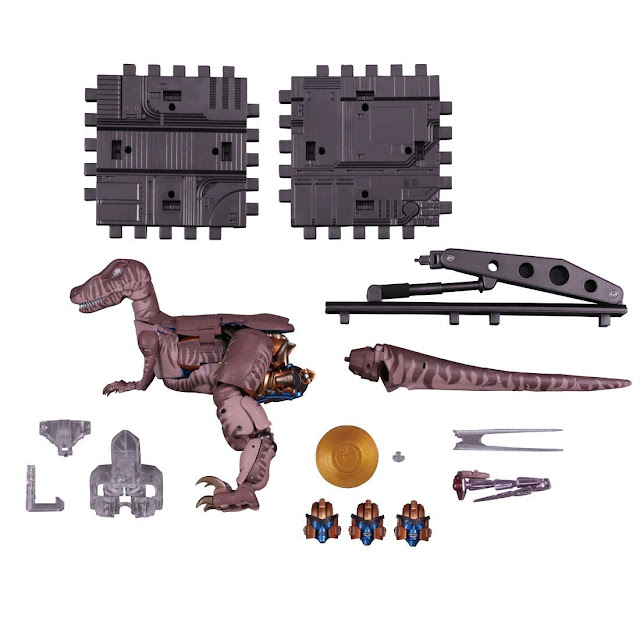 In robot mode, you probably couldn’t reasonably ask for much more than what Takara delivers here. The sculpt, paint, and details are all spot from the television program. From the golden rib details on the legs to the metallic blue colors of the face and abdomen, this figure LOOKS the part of Dinobot in every possible way. Although a little wider from the side and back then you “imagine” he should be, overall the appearance is perfect. 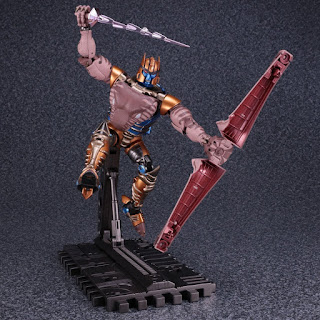 Articulation in this mode is good, but not perfect. Great head movement, an expressive set of hands, almost perfect leg and feet posability, and even an ab crunch are some of the high points. Unfortunately, in some poses the arms can be a bit of a beast (see what we did there). The transformation in the arms leads to a situation where when bending the forearm just right, some of the beast mode kibble pops out the elbow. It’s easy enough to readjust things after you get the pose sorted out, but it is a bit unfortunate. It’s also worth noting that the ankles can be a little unstable in extreme positions but frankly in most of those cases you would probably use the included stand anyways for long term stability. The included tail weapon (which spins like the original toy), sword, and multiple face and light up accessories for the head are all great and add to the figure without seeming gimmicky.

Transformation is interesting and intuitive with only a couple areas of frustration worth noting. The way the raptor legs and feet transition into the robot arms and claws is pretty smart even if the aforementioned posing annoyance keeps it from being perfect. A false raptor head chest is cleverly hidden as skin texture for the raptor stomach and even the way the robot legs go from sturdy rods to floppy bendy pieces is impressive. Getting the raptor arms into the back of the figure for robot mode can be really frustrating until you figure out just the right angle. Subsequent transformations are much easier after you figure it out. 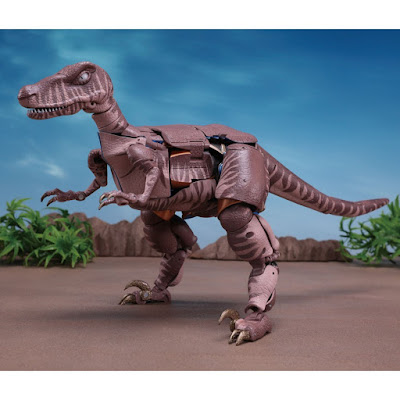 Officially, Dinobot’s alt mode is a Velociraptor. You can really see the influences of Jurassic Park in the design which coincidentally came out only a couple years before Beast Wars hit the stores. Visually, all the quirks of the shows design down to the almost humanly posable raptor hands and slightly upright and elongated head are present here. Beast modes are tough in transformers and the weakness here definitely shows up in the legs and back underside. Some exposed copper paldrons are always visible in the raptor legs and the rear definitely has some slightly visible robot parts going on, but overall from most vantage points it does the job. 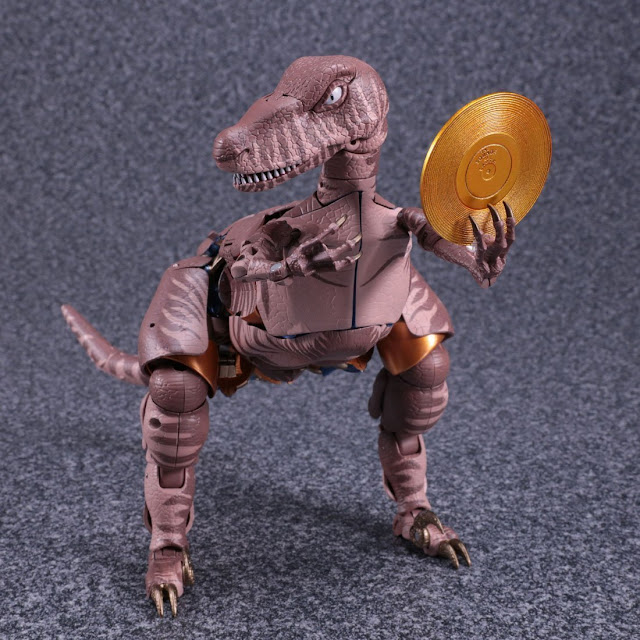 Posability for raptor mode is equal parts amazing and disappointing. The head, arms, and tail do more than they have any right to. You can even adjust the eyes to from bold to squinty thanks to a borrowed pop up gimmick from MP Grimlock. The tail both bends up and to the side at multiple points while the arms have butterfly joints and multiple bends that let you recreate even the most bizarre scenes from the show. The head has great up, down, and side to side movement as well as a great opening jaw with detailed mouth and posable tongue. I did find myself wishing there was something at the neck to allow for a more crunched in running pose but I am honestly nitpicking. The big bummer comes from the legs. No forward and back movement is possible at the hips (some of you may have read of “ratchet breaks” which really seem to be forced movement of the hip in a direction it isn’t intended to move). Additionally the feet, while having amazing ankle rocker and tilt, are just a bit loose for the mass of the rest of the figure. You really need to find a good center of gravity for poses that don’t use the stand. This is probably the only part of the figure that I would say is a serious negative. Adapters for stand posing and holding the included Golden Disc accessory are provided and work well. 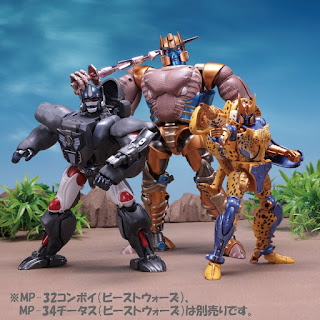 Overall, I can’t imagine anyone doing a better job than Takara did for this character. If you are willing to overlook a couple small things that keep this figure from perfection, and are a fan of the character, you won’t walk away disappointed. MP-41 Dinobot easily stands as the best Beast Wars figure to date and has me eagerly anticipating the coming of Predacon Commander Megatron later this year. You can get this figure as well as the other Masterpiece Beast Wars figures at Toy Dojo below: